Initially released in the fall of 2009, Studio One is currently a top-rated digital audio workstation software designed to handle music in a series of different ways. Practically, users can mix, record, and create their music, yet the software has video functionality as well. The application is available on Windows and macOS systems and was created by PreSonus.

So far, so good, but just like with any other software out there, unexpected situations may arise when least expected. You get some great ideas to produce new music on Studio One, find some tutorials over the Internet and the sound is suddenly off. Furthermore, you even get a message about it – Studio One failed to open speakers.

Weird, you think. You could use the speakers just minutes before and everything was alright. It is obvious that the problem is somewhere in the software. So, how do you configure it to avoid seeing this issue? How do you set it up to make sure that you can create and record your own music? It is also worth noting that this issue targets both the demo version and the full software. 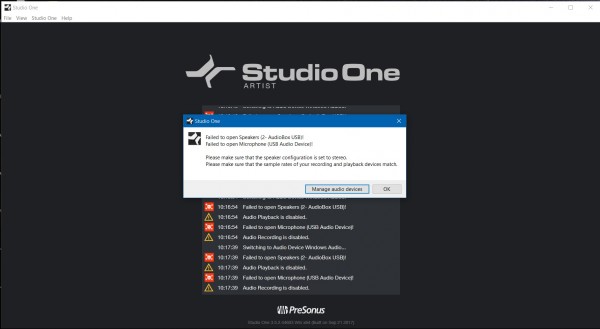 The Solution I – AudioBox

To many users, the issue is in AudioBox. Whether you are a newbie or an experienced musician, AudioBox is a simplistic and useful recording interface. It comes with the optimal features for more or less advanced recording – practically, you can plug in and record your music within seconds only. It makes recording simple.

When people use AudioBox, they often fail to configure it properly. According to PreSonus, They install it as a requirement for Studio One, but the actual software becomes their priority. They do not even bother trying the software to ensure it works. The solution is quite simple. When you see the Studio One failed to open speaker error, close the program, make sure AudioBox works, then restart Studio One.

Everyone knows Studio One is quite aggressive in taking over software. Practically, you turn it on and it uses the sound card exclusively. Other music software or even your browser will lack sound then. All in all, if you have assigned AudioBox as the default audio driver for your music equipment – like your speakers or the microphone, you should work on the buffers.

Get in the options and set them on 1024, as well as 44Hz. This is only a starting point – basic values to get the software to run. Do it while Studio One is closed, then restart. Once it is done loading the interface, find the device settings and check out the audio device. Ensure you have selected the right one before attempting to use it again. 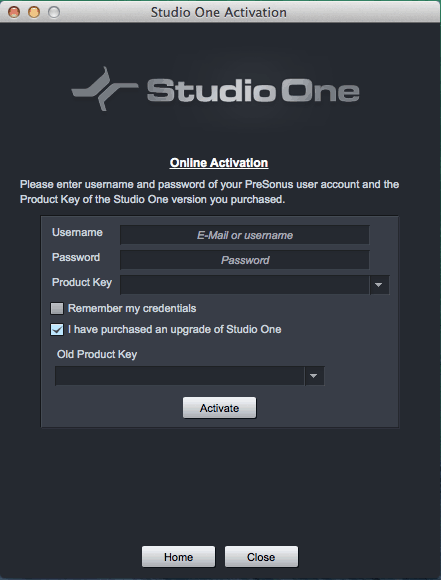 If you think installing Studio One is everything you need to start making music, you are wrong. Developed by PreSonus, Universal Control is one of the main requirements to ensure the perfect functionality of the software. Just like you have probably guessed already, many newbies forget about it because, well, PreSonus does not make its necessity so obvious.

Based on the official knowledge base, Universal Control is practically the foundation of music-making with Studio One. When connected to your computer or Mac, Universal Control is responsible for having all interfaces and mixers operating by the book. You get device drivers, launching windows with all kinds of settings, a mixer for full control and even updates for the device.

Sorting out the Studio One failed to open speakers error is one thing that many newbies deal with – the lack of experience or further installations. Unfortunately, while Studio One is designed for both amateurs and professionals, it may still seem a bit complicated for the average user. Even if you get over this error, you may still experience other issues – most of them fixed and explained on the official PreSonus forum.

Failing to record anything

Everything looks alright – the software runs properly and there are no errors. You open a new track, you plug your guitar or another instrument, enable recording and see the green bar. It looks like you are ready to make some music. But then, you start playing and the green bar does nothing. It looks like it wants to record, but it cannot. There are no meters jumping up and down either.

Open the mixer through the button on the right side of the interface and you will see a button for inputs. You should be able to see a signal on the input where you plugged your instrument. If you cannot see anything, work on the gain on the AudioBox – the input meter should go at about -12dB. You also have to ensure the input you plugged the instrument into is the input chosen for the right channel.

AudioBox must be selected as the default I/O device and unless you use a template, the setting will not be done automatically. It is a common issue – most novices start with blank songs. Start with a template instead and the configuration will be done by itself.

The default I/O device is displayed on the starting interface, at the bottom. You might see Windows Audio, for example. Anyway, if you cannot see AudioBox, configure the device again and choose AudioBox. It will solve your problem.

As a short final conclusion, Studio One is not really hard to use. It is quite basic and provides access to lots of professional features. However, configuring it can be a bit challenging, especially as not everything makes perfect sense.

Playing with the settings a bit should sort most problems out. Again, using templates for your first songs can configure everything without too much hassle, so it makes a better option than starting from scratch.

Related Topic: 3 Good & Bad Places On Where To Place Subwoofer With Soundbar